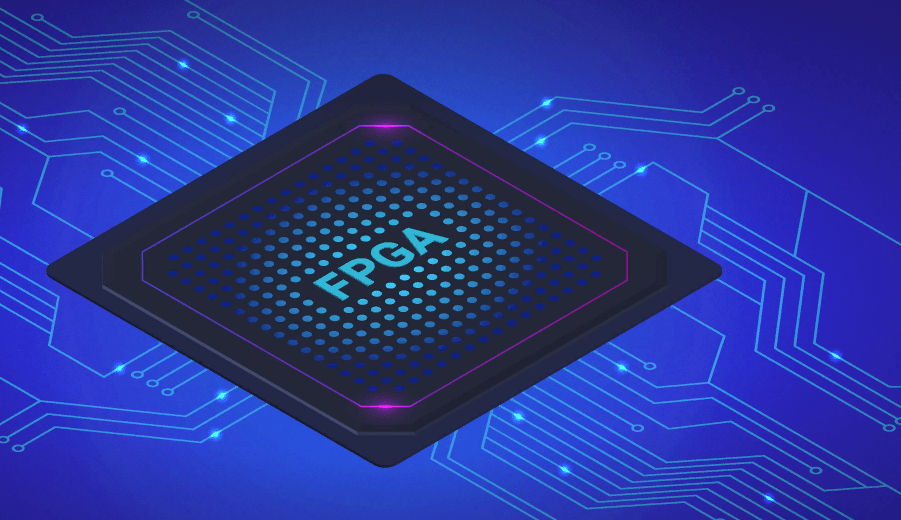 The use of integrated circuits of a specialized application (ASIC), a computer processor (CPU), a video card (GPU) and devices with programmable gate arrays are some of the methods used for cryptocurrency mining (FPGA mining). The latter approach is more flexible because the tool can use an algorithm. The article explains adaptive chips, compares them with various forms of mining equipment and lists the advantages and disadvantages of each of them.

An abbreviation of Field Programmable Gate Array in English. “User-programmable valve matrix” in translation. The chip is configured to perform one or more specific functions.

The matrices are not quite ready for operation, as they are moving from production to sale. Microchips connected to transistors are a necessary component of FPGAs. However, the matrix blocks are configured in such a way that the user can program the signal streams to follow a certain algorithm. You can restore the chip as many times as you need to complete another mission.

Programmable valve matrices do not function independently of each other, like a computer processor. They are connected to a suitable motherboard and are treated by the operating system as a separate mining farm. Due to the unusual nature of the chips, which easily overheat, each POLICY miner includes a fan that cools the matrix.

Bitcoin launched cryptocurrency mining in 2009. At that time, they were engaged in mining on personal computers, since the search for blocks did not require a high level of speed. It is said that the first commercial use of digital currency caused a sharp increase in its value. Programmer Laszlo Hayentz spent 10,000 bitcoins on 2 pizzas in May 2010. As new users joined the network, the standard CPU was no longer enough for computing.

Then individuals started mining on video cards. The inventor of this technique is a guy named Artforts, who started using a GPU for mining cryptocurrencies in July 2010.

The hashrate was 10 times higher when mining bitcoin on a GPU, but the problem with excessive power consumption persisted. FPGAs were already used in telecommunications equipment, automotive assembly and other areas in 2011, so miners paid attention to them.

Manufacturers have to eliminate unnecessary components in order to implement programmable matrices in the mining sector. Simple computer fans are now used for cooling, which has led to a reduction in energy consumption. Although the performance of the FPGA hardware was better, the cost was too high.

The introduction of ASIC miners marked the next event in the history of cryptocurrency mining. They turned out to be less complex, more inexpensive and at the same time no less effective. The boards are designed to create cryptocurrencies throughout their lifetime, so they were limited in their ability to change the algorithm of operation.

Comparison of ASIC, GPU and CPU

To save energy and increase speed, FPGA boards are used instead of computer processors and video cards. The problem for the CPU and GPU is the consumption of a large amount of memory during hashing. For programmable chips, only a chair connected to the mains and a fan are needed. The hashrate of one card can be higher than that of ten video cards when mining on FPGAs, which also consumes less energy.

The hardware interface can be used to configure the parameters of the processor or video card. FPGAs are easily adaptable and useful for various tasks, however they are often sold empty (without software). The algorithm must be created by the user. This requires knowledge of Verilog or VHDL.

Since the setup of programmable matrices is complex and expensive, miners often choose traditional methods or specialized integrated circuits (ASICs). FPGA boards have many approaches to creating electrical circuits in a later generation.

The ASIC is configured to work according to a specific algorithm when it leaves the production room; this configuration cannot be changed. For programmable chips, you can change the configuration as often as you wish, throughout their lifetime.

What issues should I solve?

Miners using programmable chips are flexible in contrast to the high setup costs and complexity. ASICs that store currencies intended for mining cannot be reused if someone wants to switch to mining a more profitable currency.

Which stores sell FPGAs for mining?

There are several chip manufacturers available for purchase:

1) Xilinx. The company has been operating since 1984 and will remain part of AMD Corporation until 2022. Virtex and Spartan brands denote chips for mining. 2) Altera. Since 1984, the software manufacturer has been doing business in the USA. It was acquired by Intel in 2015. His Stratix and Cyclone products are well known. 3)Alpha data, a European company founded in 1993 in Edinburgh, uses the manufacturer’s chips in the designs of Boeing aircraft and a number of other well-known companies. Numerous Virtex mining chips are produced for cryptocurrencies. 4) The semiconductor is achronic. Since 2004, the American company has been actively working in the semiconductor industry. Achronix is a company that represents programmable chips.

There are about 20 major manufacturers in total, although Xilinx and Altera dominate the FPGA mining business. It is not easy to find a miner willing to work in the Russian Federation. Before the introduction of Western sanctions, they could be purchased on eBay, but the site stopped delivering parcels to Russia.

For example, one million rubles is the price of the Xilinx VU9P model with pre-installed bitcoin mining software. However, you will also need to look for additional details. The final cost of the entire assembly can be twice as much.

Chinese suppliers, as usual, help in this regard. At the end of May 2022, sales of popular Blackminer FPGA miners began on the Hash Altcoin Technologies website, prices for which ranged from $ 165 (mini-model) to $ 1,539. After online payment, delivery to Russia takes about a week.

How to create your own FPGA Miner

Even with the algorithm already implemented, you can get ready-made equipment. But if you get it in parts, the total cost will be less. To create a tiny mobile miner, you will need the following components:

1) FPGA seat chip (chip). 2) Bit stream (firmware, program). 3) Location. 4) RAM. 5) The motherboard. 6) Immersion coolant (a composition in which there is no electrical conductivity).

The components are connected according to the manufacturer’s instructions. After a conversation with the management of the online store, it is advisable to order all the necessary components in one place. Sometimes the procedure is simplified due to the fact that the supplier sends along with the chip a flash drive with many versions of bitstream for various cryptocurrencies. But in most cases, the software has to be ordered from experts or searched in publicly available sources. Firmware is available from some manufacturers for an additional fee.

FPGA chips have attracted interest because of their adaptability, efficiency and speed. Currently, they have been replaced by ASIC integrated circuits, which are much more affordable and have higher performance.

Programmable circuits will be popular in 2022, although there are not many options available. The cost of buying American or European chips will not be available for a typical cryptominer. Online stores in China sell inexpensive copies.