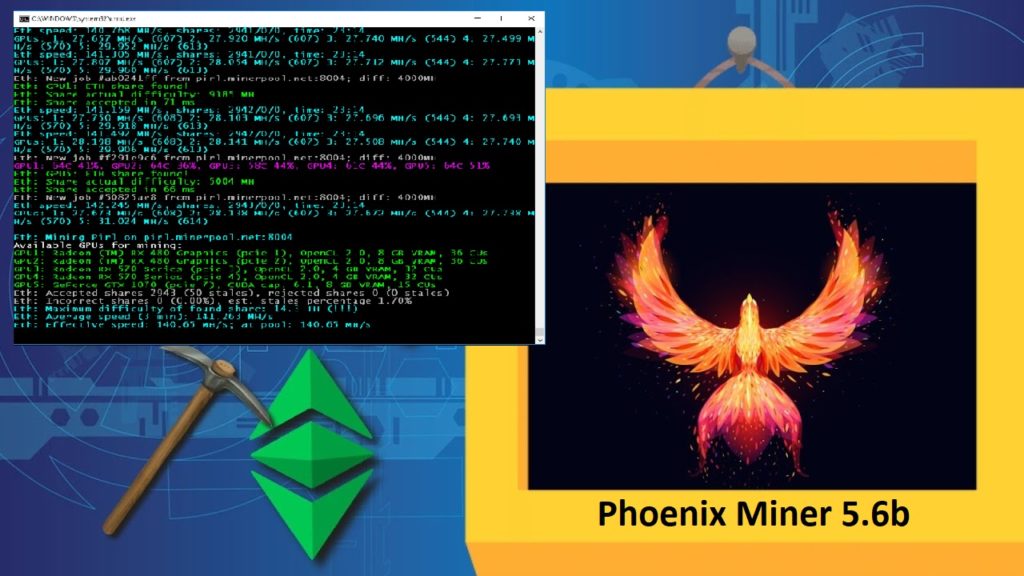 Finally, a “stable” version of the miner called “PhoenixMiner 5.6d” has been released. Phoenix Miner (Nvidia and AMD GPU miner) is a high performance Ethereum (ETH) and ERC20 miner with official full Windows/Linux support. PhoenixMiner is one of the most efficient and user-friendly miners available today, which is why it is universally recognized by miners.

New features in this release (starting with version 5.6b):

The changes of the previous beta version (5.6b) compared to the latest version (5.5c) are as follows:

PhoenixMiner also supports dual mining (simultaneous mining of ethash / ubqhash and other cryptocurrency algorithms). Currently, we only support Blake2s as a secondary algorithm for dual-mining. Note that there is no development fee for the secondary coin when using dual-mining, but the development fee on the primary coin increases to 0.9%. In other words, if you use the dual mining feature, PhoenixMiner will mine for us for 35 seconds every 65 minutes.

IMPORTANT: The Ethereum Classic (ETC) network has switched to a modified version of ethash called ETCHash. If you mine ETC, you must upgrade to PhoenixMiner 5.3b or newer , otherwise you will only get rejected shares when mining ETC.

The current DAG of ETC is 195 instead of 390 with a corresponding “compression” of the DAG buffer to about 2.5 GB. With this DAG size you will be able to mine with 3GB and 4GB cards without any problems. After that, each DAG epoch on the ETC network will be twice as long, so the DAG size will grow twice as slow as before. As a result, it will be possible to mine ETCs with 4GB cards for about 4 more years.

The switch went smoothly, all of our test setup switched to the new DAG and mining is going well. You might have to run autotune again to get optimal speed with the new DAG size.

IMPORTANT: all AMD 4GB RAM owners must upgrade to PhoenixMiner 5.2e or later to continue mining after the DAG 373 era. Additionally, here are some important tips to make the most of AMD 4GB cards with PhoenixMiner 5.2e and newer:

If you want to check the integrity of the downloaded file, use the following hashes (the last PhoenixMiner_NVRTC_Windows.zip file is needed only if you want to mine BCIs with Nvdia cards under Windows):

If you like, you can change the RIG_ID in the bat file. Specify the installation name as you would like it to appear on the Miner stats page. This field is optional. You can leave it blank. The length of RIG_ID is maximum 32 characters. Use English letters, numbers and “-” and “_” characters.

Once the download is complete, extract the contents of the .rar / .zip file. In the folder containing the miner, you must create or edit a file with the extension .bat. You can do this in any text editor (e.g. Notepad). When saving the file, it is important to select “All files” as the file type, not “txt”. Otherwise there will be .bat.txt at the end of the file name, and the miner will not be able to open the file. Your bat file (let’s say it’s called 1_Ehereum-nanopool.bat) should contain the following text (step 2):

Warning. For security reasons, Windows may not allow you to open the bat file. In this case you should allow it to open in a popup window.

Step 3: Set up the miner with your settings

WALLET_ADDRESS – enter the address of YOUR Ethereum wallet (that’s how PhoenixMiner Miner knows where to put your ETH) RIG_NAME – you can choose any name (for example, test), but don’t exaggerate: it should be maximum 32 characters, contain only letters and numbers (no special characters, like $%”*; @)

The miner will launch, run setx commands to set these environment variables, initialize each of your GPUs, create a DAG file on each of your GPUs, and start hashing. Let it run for about 20 seconds and then press “s” to display the hashing rate. If you have followed the steps above, you should see this screen.

Here are the command line parameters for some of the most popular pools and coins: