Главная » Mining » NoDevFee v15.0: How to disable DevFee in the Claymore, Phoenix, T-Rex and other miners 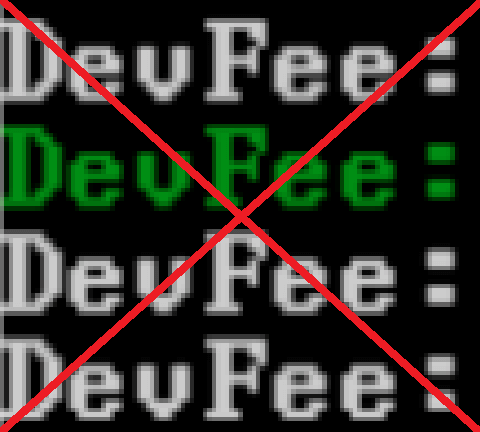 NoDevFee – How to disable DevFee commission in the miner

NoDevFee is a universal solution to disable mining fees. The utility is able to return the cryptocurrency – in the DevFee parameter, which is about 0.5 ~ 2% of the total number of miner solutions. The app can be used for both GPU/CPU and FPGA, ASIC, etc. mining rigs. Supported cryptocurrencies: The app works for cryptocurrencies such as BTC, ETH, ETC, XMR, ZCash, RVN, RTM, VTC, etc. d

Attention! There is a commission on absolutely all miners, even where it says NoDevFee, NoFee, 0% Fee and so on! Don’t be fooled, just take our word for it.

To begin with, we will give you a link to the statistics of the wallet of the Claymore miner developer, where your hard-earned 1-2% are dripping. . That’s thousands of dollars a day. Not surprising since almost the whole world uses his miner. Of course, we can reduce the commission in the miner settings with commands like “-nofee”, but this will lead to a drop in the hash rate. This is what the miner developers themselves say in their instructions:

Developers with GitHub brought this idea to life and presented us with a quick solution to this issue by writing a simple softink that sews developers’ wallets and easily searches for them in the miner and changes them to yours (which you specify in the config file).

NoDevFee is suitable for most popular miners, regardless of their versions:

2. Unpack it into the folder with the miner. Turn off mining.

3. Open config.cfg using notepad ++ () and change the wallet of the desired algorithm to your own:

4. Run Nofee.exe, if we did everything right, a window will appear: DevFee Wallet

Now DevFee (commission) is mined for you, that is, 100% of your capacities are working for you!

Read more articles about cryptocurrencies and mining at: https://crazy-mining.org

Do you like to read similar articles about cryptocurrencies and mining, do you want to support the author or ask questions? Be the first to know the news, subscribe to my telegram channel: