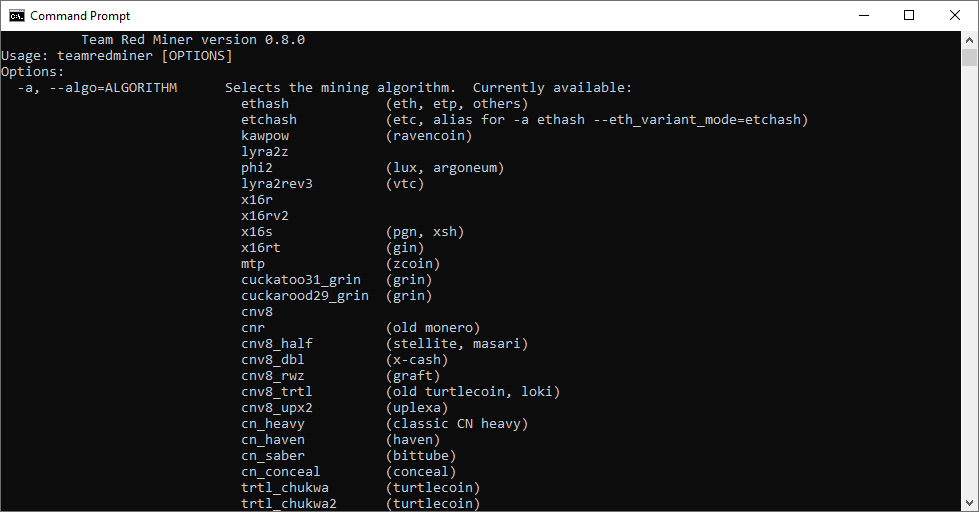 Biggest release in a long while with rewritten ethash kernels and new mining modes for all gpu types!

TeamRedMiner is a performance optimized cryptocurrency miner for AMD GPUs with support for a number of algorithms with the latest major version 0.8.0 bringing rewritten Ethash kernels and new mining modes for all GPU types. This means you should get better hashrate at a slightly lower power consumption on most recent AMD GPUs. In general, TeamRedMiner (TRM) behaves similarly to other AMD Ethash miners, the key difference is the additional mining modes (B/C-modes) that use additional VRAM on the GPUs for further beneficial effects.

Key highlights of the TRM 0.8.0 release:

– Polaris: Efficiency and slight hashrate increase. B-mode reintroduced for added hash. B-mode must be enabled with --eth_aggr_mode or --eth_config=Bxxx.
– Vega 56/64: greatly improved base kernel for efficiency. New B-mode that can shave off additional 1-2W on top of the A-mode kernel. B-mode must be enabled manually with --eth_config (--eth_aggr_mode does not apply). Tuning numbers have changed – do NOT keep your old static –eth_config values.
– Radeon VII: huge boost with its new C-mode but requires a special Linux setup. Can now do 100 MH/s on most air cooled VIIs. See tuning guide.
– 5700/5700XT: can shave off as much as 8-9W(!) of power using the new B-mode and dropping core clk+voltage. B-mode now the default mining mode. Unless you retune your core clk+voltage you will see a tiny power draw increase instead and not benefit from the upgrade, so read the migration guide.
– 5600XT: new B-mode has a much smaller effect. A-mode remains the default mining mode. See new tuning guide for more details.
– The DAG cache is NOT compatible with the new B/C-modes. ETH+ZIL switchers have to choose between caching the epoch 0 dag and using the new mining modes.
– Ethash 4GB kernels NOT rewritten in this release, performance remains the same as in 0.7.x.

The miner is available for both Windows and Linux operating systems, a closed source software with 2.5% to 3% development fee built-in for most algorithms except Ethash and KAWPOW, for KAWPOW it is 2% and for Ethash on Polaris GPUs the dev fee is 0.75% and for all other AMD GPUs is 1.0%.

Setting up and running TeamRedMiner

Let’s consider setting up a .bat file of a program for Ravencoin mining.

A ready-made example (don’t forget to change the wallet to yours!)