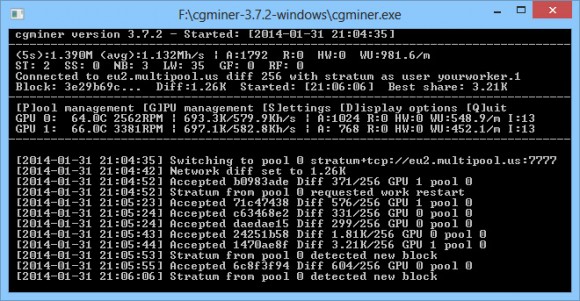 CGMiner includes overclocking, monitoring, fan speed control and remote interface features. Other features include self-discovery of new blocks using a mini-database, binary cores, multi-GPU support, and processor mining support. There are many other characteristics of this miner, which you can find out in this article about CGMiner.

CGMiner 4.1.11 – This is a multi-threaded multi-bullet FPGA and ASIC miner for bitcoins, as well as the most popular miner for GPU / FPGA / ASIC. CGMiner – This is an open source GPU miner written in C and available on several platforms such as Windows, Linux and OS X. One of the things that make it extremely popular is the fact that it is based on the original Cpu code. Miner.

If you compile cgminer with a version of CURL before 7.19.4, then some of the above will not be available. All available since version 7.19.4 CURL

If you specify the –socks-proxy option for cgminer, it will be applied only to all pools that do not specify their own proxy settings, as described above.

After saving the configuration from the menu, you do not need to give the arguments to cgminer, and it will load your configuration.

Miner CGMiner is designed to work with AMD graphics cards. Since he does not know how to extract currency using CUDA technology. If you have a computer or farm with NVIDIA graphics cards, it is best to use Claymore Dual Miner.

Of the interesting features of this program, it is worth noting the availability of tools for overclocking the GPU and even for controlling the speed of coolers. It is recommended to use them very carefully.

Even CGMiner can provide debugging information, automatically disable a “problem” worker, work through a proxy, and use the Load Balance and Round Robin strategies. The user is given the opportunity to specify the width of the vectors, time periods for reconnection, create artificial delays for routers and configure a separate message output.

The intensity of the main indicator that affects the speed of the miner, its value is set from 0 to 20. It should be borne in mind that too high a rate can negatively affect the speed of mining, since it can exhaust all available memory and actually reduce the speed of mining at best. In the worst case, a large number of incorrect calculations and HW errors will appear. Please note that if the intensity is not set, CGMiner will dynamically adjust it taking into account the possibility of comfortable work on the PC.

The parallel stream controls the optimal amount of computation that the scrypt algorithm can perform. Initially, it is configured to maximize the use of multiple threads of all the shader blocks of the graphics card that it has. The value must be a multiple of the number of shader blocks of the video card. Accordingly, if “thread parallelism” is indicated, then the shaders can be removed. It is recommended that you spend some time looking for the best value for your video card to achieve maximum performance.

A new version of CGMiner git 5.3.1-tpruvot has appeared for the production of Decred using AMD and NVIDIA GPUs. This new version of the miner should work better than the previously available CGMiner DCR plug.

This branch comes with support for both protocols, adopting a bead such as a formal protocol, and more advanced work through the layer. As mentioned above, the miner will work with AMD and NVIDIA GPU graphics cards (using OpenCL, not CUDA).

Keep in mind that NVML monitoring only works in the 64-bit version. When testing this version of the miner, we were able to achieve a higher hashrate on video cards from NVIDIA than when using tpruvot fork ccMiner to mine DCR. Those who manufacture using AMD graphics cards should have no problems switching to this version of the miner. You will probably be able to get the best Decred mining results using Gatework-enabled pools through Stratum.

The main objective of Cryptonight is not to create a gap between PC users and owners of specialized ASIC devices during mining. Abadi and other cryptographers have developed memory sensitive algorithms.

The main idea is to highlight a large data block (Notepad) in RAM with an unpredictable sequence in it. The block should be large enough to make data storage more convenient than calculating it each time it is accessed. The algorithm should also prevent internal concurrency, that is, N simultaneous threads should require N times more memory at the same time.

The popular Scrypt algorithm also uses memory, but leaves the possibility of creating powerful and relatively inexpensive computing devices to calculate this algorithm. In the case of CryptoNote, unlike Scrypt, each new block (64 bytes) depends on all the previous ones. The new algorithm requires about 2 MB of RAM, which is the minimum size of the L3 cache of modern processors. At the same time, this amount of RAM eliminates the use of ASIC.

We must distinguish between CryptoNote and CryptoNight. CryptoNight is one of the implementations of the CryptoNote protocol. According to the Kryptonite algorithm, Monero (XMR), ByteCoin (BCN), Aeoncoin were built.

The advantages of production on this algorithm: