Главная » Mining » GMiner 2.07: Download With a Performance Boost for the Cuckatoo32 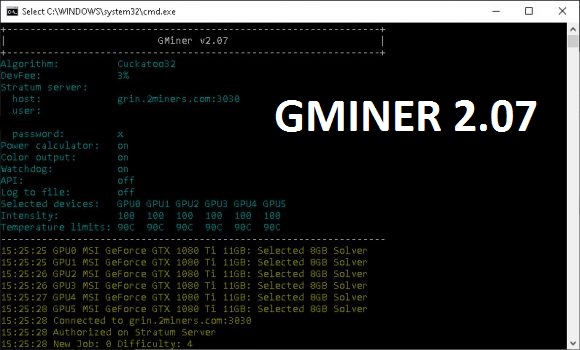 GMiner 2.07 (Nvidia and AMD GPU Miner) continue to improve the performance of Cuckatoo32 with the latest update, which can provide up to + 20% performance improvement depending on the GPU and OC mode used, according to the developer. Definitely, this is a good improvement that is worth updating if you are developing everything that uses the Cuckatoo32 algorithm, but also keep in mind that the default development fee for the Cuckatoo32 algorithm is set at 3% and is not the standard 2%, as for most other supported algorithms. from GMiner.

GMiner miner software was originally only an Nvidia GPU miner, although some algorithms are already supported on AMD GPUs. Please note that GMiner is a closed source miner for Nvidia and AMD GPUs with binary files available for both Windows and Linux, with the firmware paying developers 2%.

GMiner was created by a Russian group of specialists in the field of high performance computing and cryptography.
The first version of GMiner was released on September 21, 2018 and was received quite warmly among users.
Thanks to its unique developments and stability, in just six months, the miner became a favorite on the Equihash algorithms.
The miner is focused on NVIDIA and AMD platforms and supports most popular algorithms such as: Ethash, ProgPoW, KAWPOW, Equihash, CuckooCycle.
GMiner maintains a leading position in the mining of such coins as Beam, Grin, Cortex, Bitcoin Gold.
In 2020, the miner added support for Ethash, ProgPoW and KAWPOW algorithms with high performance relative to competitors.
The development team never stops at what has been achieved and achieves the maximum performance of the algorithms with the minimum power consumption, it is these qualities that distinguish GMiner from the competitors and win the hearts of users.

How to set up Gminer

Using the binance pool example, the batch file will look like this:

Now save this file with .bat extension and double-click it to run.

To set up a batch file, we need to enter 5 commands in turn:

This is how the Gminer batch file for eth will look like:

For NiceHash, the batch file will be like this: