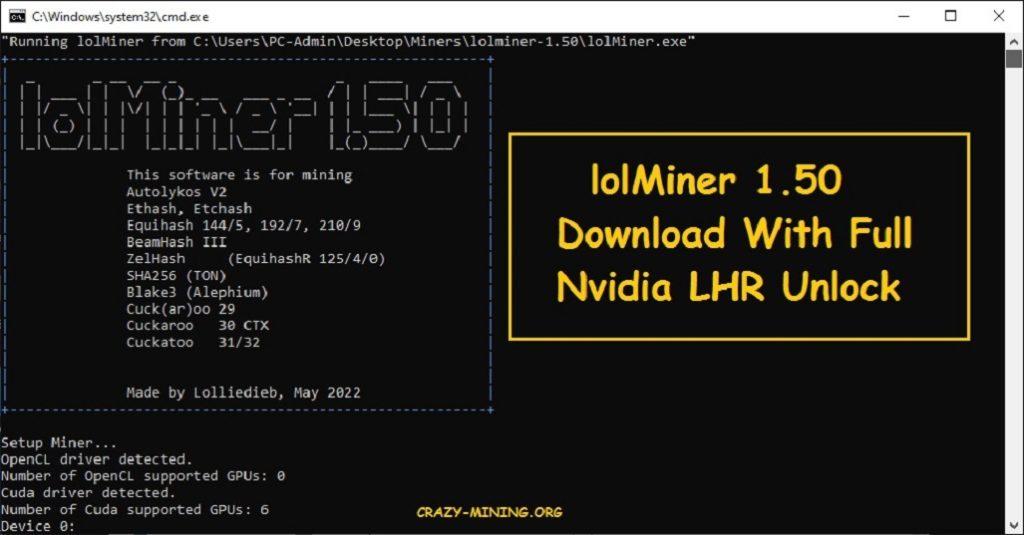 Another Nvidia ETH miner is now available with full LHR unlock – lolMiner 1.50. The miner offers 100% LHR unlock on Nvidia GPUs with LHR V1 and V2 GPUs for all supported algorithms including Ethash and dual mining. It requires Nvidia video driver version 510.x (Linux) or 512.x (Windows) and sudo/admin rights to work correctly. lolMiner 1.50 also comes with an experimental LHR v3 unlock up to ~90% (RTX 3050) and ~92% (RTX 3080 12G) although this can still be a little problematic and not 100% stable, if you run into problems you always you can go back to a more secure ~65% unlock.

lolMiner has only 0.7% commission on Ethash, 1.5% on Autolykos V2 and only 1%+0% commission on dual mining. With that kind of feature set you won’t find a lower one on the market.

For the fastest launch, it will be enough:

As an example, we show the lolMiner settings for mining ZelCash on the 2Miners pool. Here is the bat file.

How to configure .bat файл

The easiest way to start using lolMiner is to configure the program from the command line. Just open a terminal (Linux) or create/edit a ready-made .bat file (Windows)

After you finish the setup and run the bat file, you will see the following.

Read more articles about cryptocurrencies and mining at: crazy-mining.org

Do you like reading articles like this about cryptocurrencies and mining, want to support the author or ask questions? Be the first to know the news, subscribe to my telegram channel: