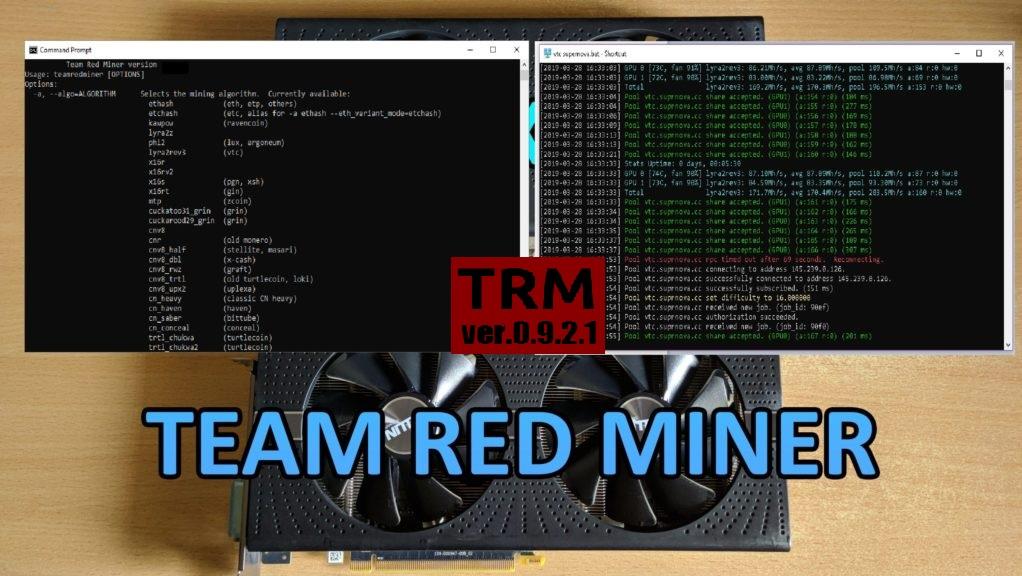 TeamRedMiner TRM is an AMD GPU optimized cryptocurrency miner. This miner supports a number of algorithms. This software can mine cryptocurrencies such as Ethereum, Ravencoin, Grin, Zcoin and others. It is a command line program. This means that you run it either from the Windows command line or the Linux console, or you create shortcuts to predefined command lines using a Linux Bash script or a Windows command (.bat) file.

Single TON algorithm for all GPUs and dual ETH+TON mining for Navis and Big Navis! This release adds +20-25% hash rate for TON on all AMD GPUs, including dual mining. Vega and Polaris support for dual-mining will be released soon.

TON pool support is limited to Icemining and Toncoinpool. Please read TON_MINING.txt and DUAL_ETH_MINING.txt manuals for more information. The mining distribution contacts should read TRM_DUAL_MINING_API.txt to learn how to submit data for dual mining.

FPGA devices are supported and tested on Linux (Windows is currently unsupported):

The miner reports the GPU hashrate every 30 seconds. This is full GPU hashrate before deducting dev fee (your pool hashrate will be a bit lower). The miner includes a read-only api based on the sgminer-5.5 API. Both json and text formats are supported. We refer you to the sgminer api documentation for more details. The miner also includes a Claymore-compatible miner API with support for a subset of the API. For bug reports and/or feature requests, please open an issue on the github tracker of this project. For command line examples, see the batch/shell scripts in the miner download packages. For command line options, see the USAGE.txt file that comes with the miner.

First, you need to download the software from this GitHub link.

You need to choose the right script file (bat file) depending on the algorithm you want to use for mining. In the example of a binance pool .bat file it would look like this:

Edit this file (replace the name of the account username1 with the name of your account). You can also change the mining URL, i.e. choose a different pool. After that save it as a batch file -.bat – if you work in Windows or as a bash file – .sh – if you work in Linux.

To configure the batch file for ETH, we need to enter six commands in turn:

This is what the TeamRedMiner binary will look like for eth on the ethermine pool:

This is an example for RVN:

Read more articles about cryptocurrencies and mining at: https://crazy-mining.org

Do you enjoy reading articles like this one about cryptocurrencies and mining, want to support the author or ask questions? Be the first to know the news, subscribe to my telegram channel: