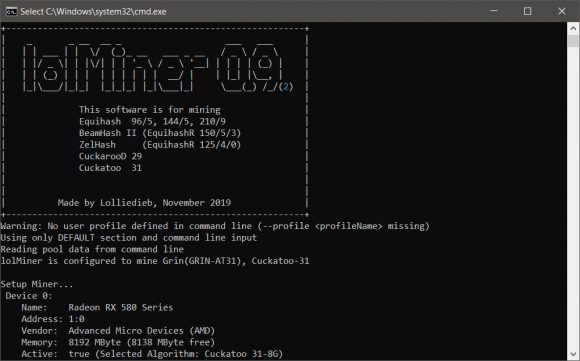 lolMiner v0.9.3 — this is the Equihash / Cuckatoo miner with a focus on AMD GPUs (based on OpenCL). Please note that the program will work on most Nvidia cards, but speed and stability may vary.

About Early Job Cancellation for GRIN

The GRIN proof of work is a compute intense and rather slow algorithm. Especially C31 often needs (at 1 g/s) about one second for each graph processed. In case a new job (for a new chain height) arrives, the current calculation effort is worthless, because the block that was mined on already got found.
lolMiner 0.9.3 now introduces an early cancellation for long lasting works: if a new work arrives that invalidates the current run calculations, they get canceled to start quicker on the fresh work. To demonstrate the effect see the example describing the 0.9.2 and 0.9.3 difference:
Assume you have a card running 1 g/s on GRIN-AT31. Then in 2 minutes (120 seconds) it will be able to process 120 graphs. On average – Grin has a 1 minute block time – two of these graphs are already obsolete when they got finished.
lolMiner 0.9.2 will display the 1 g/s, because of 120 processed graphs per 120 seconds. But two of the graphs are then filtered out in the stratum module, thus the pool can see at most 118 / 120 = 0.983 g/s (minus about 1 graph fee).
lolMiner 0.9.3 will cancel the running work before it gets completed. On average you will be able to process one more graph then 0.9.2 assuming both are canceled about half way through. Thus lolMiner 0.9.3 starts 121 graphs and completes 119 of them. The displayed hash rate is now 119 graphs /120 seconds = 0.991 g/s. This equals what the pool could see (minus one for fee), because the 119 completed are the ones that got not canceled early.
Conclusion: lolMiner 0.9.3 DISPLAYED hash rate may be a little lower then 0.9.2, but what arrives at pool is better. The slower the cards are, the more drastic is this effect, e.g. a 580 8G running at 0.65 g/s will benefit almost 2% on pool side, a VII with 1.75 g/s only half a percent.
Combined with the mostly on GPU cycle finder lolMiner achieves a stale share rate of less then 0.7% and thus gives you best displayed to pool hash rate ratio available for Grin Cuckatoo-31.

For the quickest start, it will be enough:

Attention! The archive contains two versions of the program. The first is for the Beam coin, the second is for everyone else!

The archive with the program contains ready-made examples for Beam and other coins, a configuration file, as well as instructions in Russian.

The easiest way to start using lolMiner is to configure the program from the command line. Just open a terminal (Linux) or create / edit a finished .bat file (Windows)

How to configure .bat file lolMiner

We examined the simplest configuration to run the program.

Let’s see what we ended up with in a batch file:

You can start mining by double-clicking on the .bat file with the desired coin. We start on a farm with Windows and AMD cards and see what the program console writes to us:

We wait some time until all devices are detected and see the following:

After waiting a bit, the console will show us the hashrate and temperatures of all the GPUs.

A new algorithm is available with the –coin ZEL command and replaces the old one. New parameters can already be used in the test network In version 0.7 5 alpha