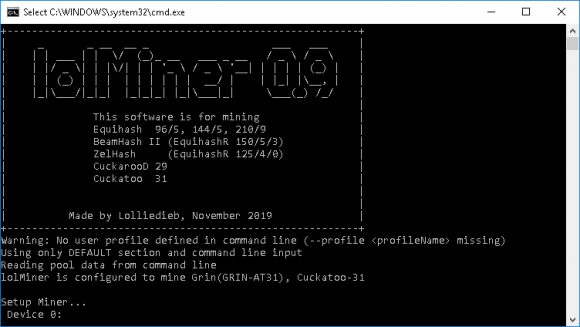 This is the announcement thread for lolMiner 0.9.7 a multi algorithm Equihash / Beam & Grin miner with focus on AMD GPUs (OpenCL based).
Note it will run on most Nvidia GPUs, too but the speed and stability may vary.

The main evidence of the Grin Cuckatoo 31+ is designed so that the original Cuckatoo-31 will disappear from mid-January 2020, which means that its complexity will slowly increase over the course of 31 weeks until it becomes impossible to get the C31 block on the chain . But just like the design, the chain also implements more complex Cuckatoo instances, namely Cuckatoo-32 … Cuckatoo-63, which can also create blocks. The difficulties of these higher authorities will remain stable, so at some point it will be more profitable to mine Cuckatoo-32 instead of Cuckatoo-31 (probably from mid-February).

We remind you that lolMiner is an OpenCL GPU miner open source, available for Windows and Linux only in the form of precompiled binary files, and that for the use of software for all supported algorithms a fee of 1% is charged. The miner should run on Nvidia GPUs with OpenCL, but stability and performance may not be optimal, which is why it is best suited for AMD GPUs.

The first way to use the miner is from the command line interface. Syntax:

For more information about shortcuts and additional parameters, please read the lolMiner_manual.pdf file that came with the miner.