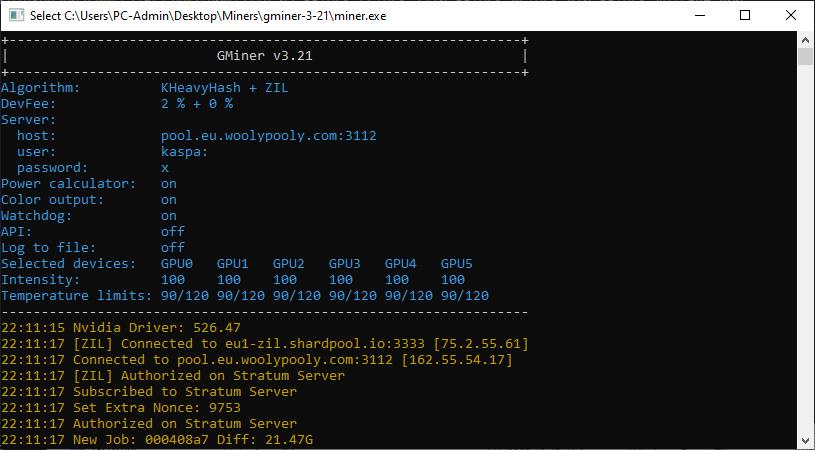 The latest update of GMiner v3.21 contains an exciting new feature for anyone currently mining Kaspa (KAS), namely the dual mining capability Kaspa (KAS) + Zilliqa (ZIL) although you can also use another supported miner coin instead of KAS, if you like. Previously, ZIL mining could easily be combined with just Ethash or ETChash coins, or you could also triple mining with KAS. Now, with the latest version of GMiner, you can choose to mine KAS or another coin with a different algorithm along with ZIL, when it comes time to mine Zilliqa, the miner will briefly switch and then return to mining Kaspa or the coin you are mining. In this way, you will earn additional profit without losing almost anything from your usual mining hashrate for KAS, RVN, etc.

Below you can find an example command line to run GMiner on Windows on Nvidia GPUs for KAS + ZIL dual mining:

Make sure you replace “KAS_WALLET”, “ZIL_WALLET” and “WORKER_ID” in the example with your wallet and worker IDs, the example above also sets core and memory clocks and tries to lock GPU voltage for low power KAS mining on RTX 3070 .

Unfortunately, it looks like there are some issues with the correct GPU voltage setting and as a result the power consumption will be higher compared to the same low power mining settings on lolMiner. So there is currently a slight trade-off between GMiner and KAS + ZIL dual mining – you get higher power consumption to get to ZIL.

You might want to wait a bit until the GPU voltage setting issue is resolved to get the same performance and power consumption as lolMiner, Kaspa mining with Zilliqa extra profit, although you can still try other coins that are not the same energy efficient along with ZIL dual mining.

GMiner was created by a group of Russian specialists in the field of high performance computing and cryptography. The first version of GMiner was released on September 21, 2018 and was quite warmly received by users. Thanks to its unique developments and stability, in just six months, the miner has become a favorite on Equihash algorithms. The miner is targeted at NVIDIA and AMD platforms and supports the most popular algorithms such as: Ethash, ProgPoW, KAWPOW, Equihash, CuckooCycle.

GMiner maintains a leading position in the mining of such coins as Beam, Grin, Cortex, Bitcoin Gold.
In 2020, the miner added support for Ethash, ProgPoW and KAWPOW algorithms with high performance compared to competitors. The development team never rests on its laurels and achieves maximum algorithm performance with minimum power consumption, these are the qualities that distinguish GMiner from competitors and win the hearts of users.

How to set up Gminer

Using the binance pool example, the batch file will look like this:

Now save this file with .bat extension and double-click it to run.

To set up a batch file, we need to enter 5 commands in turn:

This is how the Gminer batch file for eth will look like:

For NiceHash, the batch file will be like this:

Only Nvidia graphics cards are supported for these commands.

--lhr – specify a list of LHR modes separated by a space.

--lhr_tune – a list of LHR tuning values separated by spaces, which means the percentage of unlocking of the video card.

--lhr autotune – specify a list of LHR autotune separated by a space.