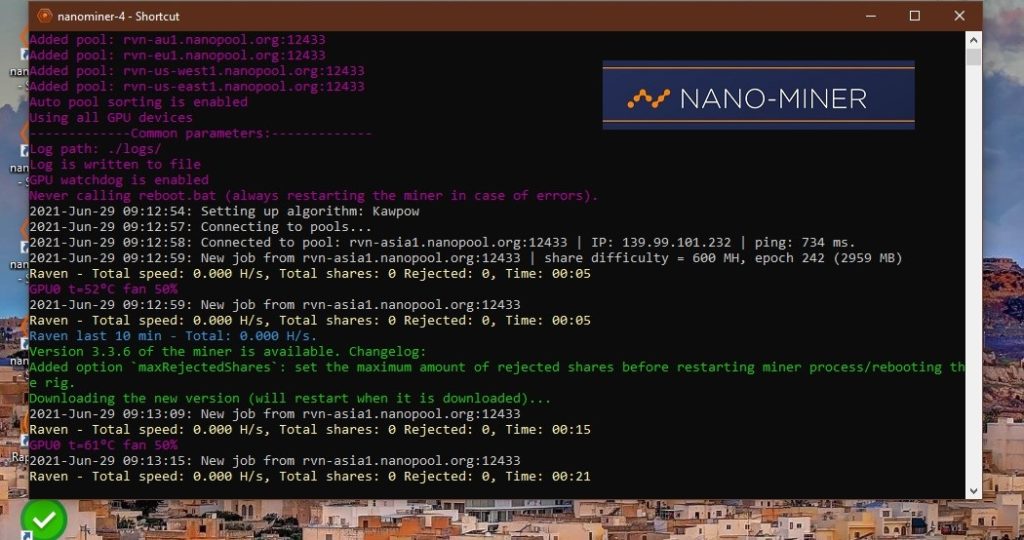 We are pleased to present you the newest version of nanominer from nanopool. Nanominer is a universal tool for mining cryptocurrencies based on Ethash, Etchash, KawPow, Octopus(CFX), Ubqhash, Cuckaroo30, RandomX, Verushash and Autolykos(ERGO) algorithms. This tool is suitable for both beginners and professional users. Fast, reliable, efficient.

Nanominer – is a cryptocurrency miner that runs on AMD, NVIDIA video cards and on the CPU. It supports dual mining mode, overclocking and power limit control. There is a convenient web-interface for tracking statistics. It is mainly used for mining such cryptocurrencies as Ethereum, Zilliqa and Ergo.

Developer fee for using nanominer takes the form of a commission from mining to his wallets once per 2 hours of work. The commission is:

nanominer is a software product developed by nanopool for creating cryptocurrency structural units based on the following algorithms:

You can run nanominer from the command line with the necessary arguments. You must transfer at least one algorithm and wallet. All general configuration options on the command line must be specified before the first “algo” parameter. Here are command line examples for running Ethereum and Monero:

If no algorithm is specified, ethash is used by default. Therefore, the following commands will run the ethash algorithm:

The helper scripts folder with all its contents is still there for those who use it.

How to run Nanominer via batch file

In order to work with NVIDIA video cards, you need:

To start mining Ethereum with a nanominer, simply enter your wallet into the configuration file.

Let’s start with the .bat file. In the same folder as nanominer.exe, you need to create a file with the extension .bat.

Just copy any .ini file and give it the extension .bat.

Open the .bat file with Notepad. Below is an example setup for Ethereum. You need to enter the following commands into it:

Instead of username1, just paste your login from the Binance Pool.

After everything is done in step 2, you are ready to mine. All that’s left to do is launch the miner and then go to the Binance Pool where you can track your mining progress.

The program is launched in the standard way: double-click the left mouse button on the file with the .bat extension. After launch, a window opens with all the parameters entered.