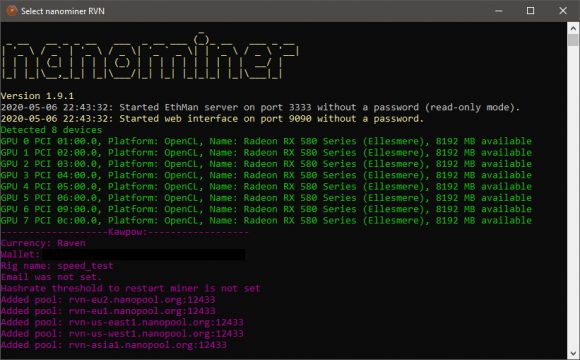 The latest Nanominer 1.9.1 adds support for the new KAWPOW algorithm used by Ravencoin (RVN) for AMD GPUs with support for Nvidia GPUs, which will also be available soon.

In fact, this is the second GPU miner that supports KAWPOW on AMD, the other is NBMiner, both miners are closed source and with a 2% fee for developing the KAWPOW algorithm. Nanominer claims that they use their own custom implementation for KAWPOW, and we see a slightly higher hashrate compared to what we get with NBMiner on the same AMD Radeon RX 580 GPUs, although both miners manage to give out just over 10 MHz / with on our test setup. We remind you that since KAWPOW is based on ProgPoW, it also uses GPUs intensively and is not so dependent on memory, so overclocking the GPU can help increase the hash rate.

Nanominer – it is a closed source miner developed by Nanopool for Linux and Windows, supporting AMD and Nvidia GPUs, as well as mining processors.

When launched, nanominer reads the installation file config.ini from the current directory of the program. To assign a specific name to a configuration file, it must be written as the first argument on the command line.