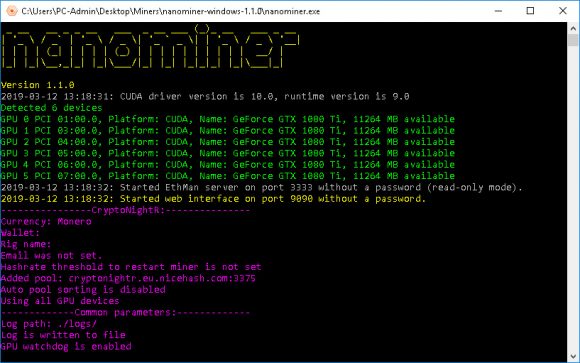 nanominer 1.6.1 (Nvidia & AMD miner) is software developed by Nanopool to create cryptocurrency structural modules based on the following algorithms: Ethash, Ubqhash, CryptoNight (v6, v7, v8, CryptoNightR, Reverse Waltz), Cuckaroo29, Cuckarood29 and RandomHash. The current version of nanominer was created to work with all cryptocurrencies based on these algorithms, including: Ethereum, Ethereum Classic, QuarkChain, Ubiq, Monero, Graft, PascalCoin, GrinCoin and many others.

This version of nanominer works on Windows or Linux with AMD or Nvidia graphics cards (except RandomHash algorithm, which is supported only on the processor).

Payment for using nanominer is carried out in the form of a commission from mining to its wallets once every 2 hours.

When launched, nanominer reads the setup file config.ini from the current directory of the program. To assign a specific name to a file configuration, it should be written as the first argument in command line.