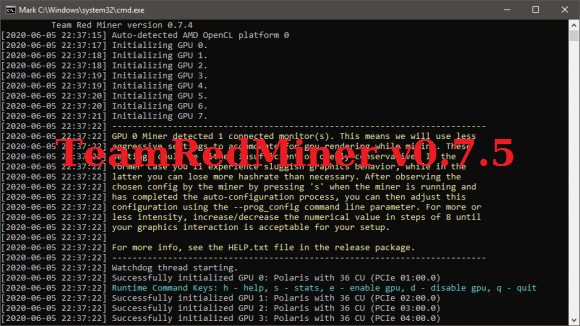 The TeamRedMiner miner is available for Windows and Linux operating systems. Closed source software with development costs from 2.5% to 3% is built-in for all algorithms except Ethash and KAWPOW, for KAWPOW it is 2%, and for Ethash on Polaris GPUs, the development fee is 0.75%, and on all other GPUs – 1%.

TeamRedMiner – performance-optimized cryptocurrency miner for AMD GPUs with support for a number of algorithms with the latest version 0.7.4, aimed at expanding Ethash support for 4 GB AMD GPUs for the maximum possible number of upcoming eras . The previous version 0.7.3 stopped working on the Epoch 351, which Ethereum Classic (ETC) has now crossed, so anyone who uses the AMD 4GB GPU on ETC or Nicehash should update this updated version as soon as possible. With Team Red Miner 0.7.4, Ethash support for 4 GB GPUs should be available before Epoch 380-383 with ETC, reaching them about a month earlier than ETH this year. An alternative option for mining Ethash 4 GB AMD is PhoenixMiner 5.0b, which also recently solved this problem. In addition to resolving issues with Ethash support, the new version also provides an additional performance improvement for KAWPOW, the results of which vary depending on your AMD GPU, as well as some other general improvements and fixes, which you can read about below. Team Red Miner is already the best option for mining KAWPOW on AMD GPUs, in our opinion, in terms of performance, but an additional increase in hash speed is always welcome.