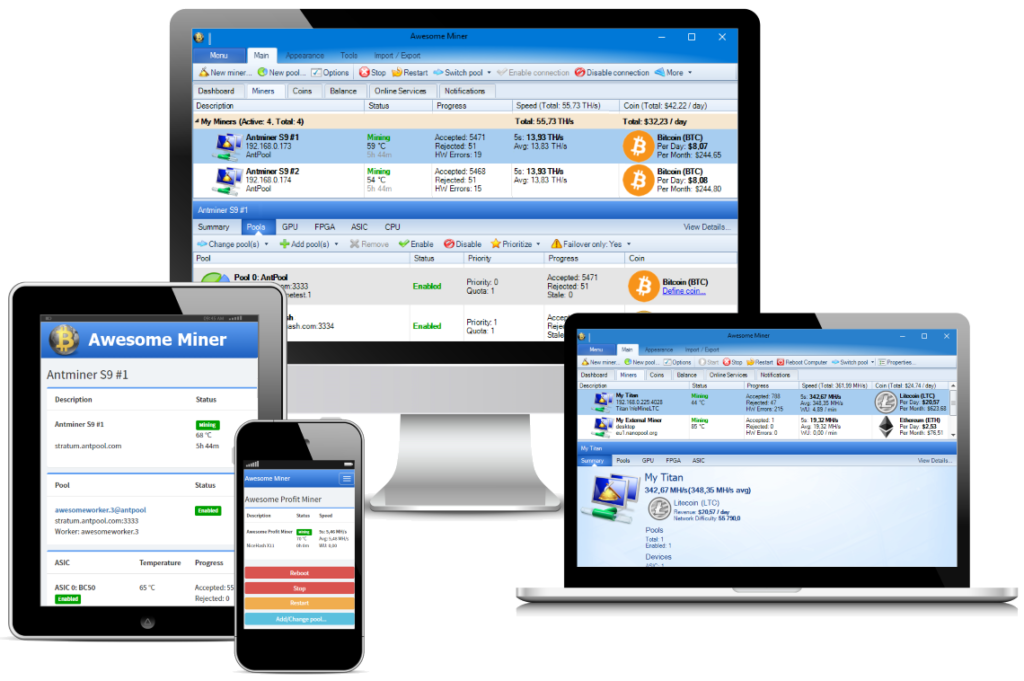 It is recommended to install the firmware through Awesome Miner. Awesome Miner can install Awesome Miner firmware on compatible Antminers, including Antminers with SSH access disabled and firmware signature verification enabled. The only exceptions are:

To install the firmware through Awesome Miner, go to the toolbar:

The firmware can be selected from the list, and Awesome Miner will automatically download and install the firmware on all selected miners.

Awesome Miner is a Windows application for managing and monitoring mining of Bitcoin and many other crypto currencies.

IMPORTANT! This software is provided by the author “as is” and any express or implied warranties, including, but not limited to, the implied warranties of merchantability and fitness for a particular purpose are disclaimed. In no event shall the author be liable for any direct, indirect, incidental, special, exemplary, or consequential damages (including, but not limited to, procurement of substitute goods or services; loss of use, data, or profits; or business interruption) however caused and on any theory of liability, whether in contract, strict liability, or tort (including negligence or otherwise) arising in any way out of the use of this software, even if advised of the possibility of such damage.

Awesome Miner Remote Agent is only required when using the Managed Miner feature on remote computers.

An easy way to get started and achieve better hashing performance is to use one of the predefined mining profiles. You can configure your mining profile through Awesome Miner or the Antminer web interface.

Why does the Antminer web interface not work properly after updating the firmware?

Please hold down the Ctrl key and click the Reload button in the web browser or use the key combination Ctrl + F5. This will clear any cache of the old firmware user interface and solve the problem. For more information, see the Wikipedia Guide for a complete reload of a web page.

Why does the miner reboot itself?

If the mining profile is configured for a full reboot, the miner can reboot it on its own in order to better configure or fix ineffective mining chips. It is expected that the miner will reboot several times the first time you use the firmware. If the state of the chip is really bad, it is recommended to limit the frequency that the firmware will use for the chip. In the miner’s web interface go to “Miner Configuration” -> “Chip Auto Tune” and set “Minimum Freq” to 400.

What is the mining fee?

The firmware has a built-in mining board to support firmware development. The purpose of the firmware is to provide significantly better hash performance, more features, and improved integration with Awesome Miner, which makes mining fees very affordable.

Read more articles about cryptocurrencies and mining at crazy-mining.org

Do you enjoy reading articles like this one about cryptocurrencies and mining, want to support the author or ask questions? Be the first to know the news, subscribe to my telegram channel:

ASIC FIRMWARE: Download for Antminer and instructions for their installation