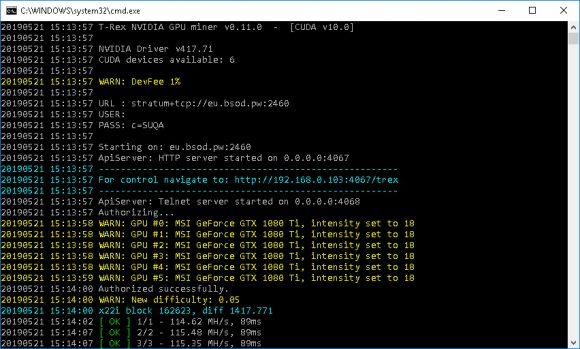 T-Rex 0.11.0 Nvidia GPU Miner (With Significant X25x Performance Boost). Download for Linux and Windows. T-Rex is a closed source miner with a built-in development fee of 1%(DEV-FEE). Also make sure that you have the latest video driver installed (the latter to support CUDA 10), since the binaries for Linux and Windows are compiled for CUDA 9.1 / 9.2 / 10.0.

In addition to supporting the new algorithm, the newest T-Rex contains some bug fixes. Fixes that help improve miner stability. The previous release of T-Rex 0.10.2, released a couple of days ago, also brought support for the MTP (Zcoin) algorithm. So this is something new if you missed the previous update and are still using the fairly old version 0.9.2.