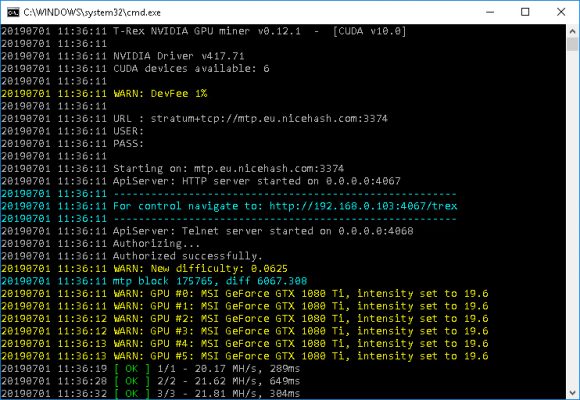 T-Rex 0.13 (Nvidia GPU Miner) – a new update to the T-Rex miner, which brings with it the following changes and improvements: Added the Tensority algorithm (for RTX, 3% dev fee) Bytom coin. The dedal algorithm is returned (was removed in the last release). Added SSL support. Vatchdog now displays restart statistics for all GPUs. Restarting the miner after the update is no longer taken into account in the restart counter. The command to turn off the miner through the API when the vatch dog is turned on is fixed.

Note! T-Rex is a closed source miner with a built-in development fee of 1%. Also make sure you have the latest video driver installed (the latter to support CUDA 10). Since the binaries for Linux and Windows are compiled for CUDA 9.1 / 9.2 / 10.0.

Other versions of T-Rex miner: