Главная » Articles » Home-made ATM for transactions in the Lightning Network 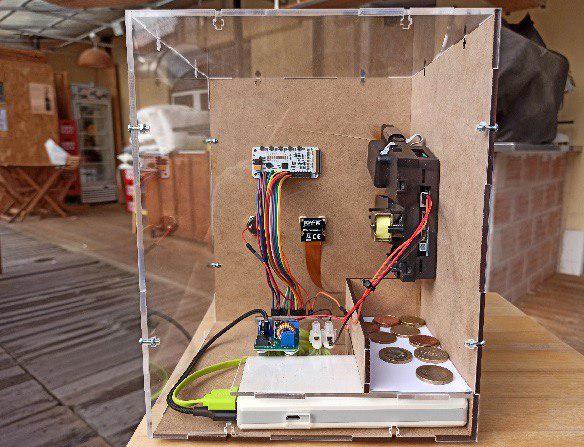 Got a lot of little things in your pocket? Then it can be used to buy a small amount of bitcoins, or rather, its one hundred millionths of shares – Satoshi.

A bitcoin fan under the pseudonym 21isenough on Twitter created an ATM prototype for the Lightning Network – a home-made device that allows you to transfer small amounts of bitcoins via the Internet to a real bitcoin wallet.

21isenough claims that his ATM even allows him to buy one satoshi. The invention, which aroused interest at the Baltic Honeybadger Conference back in September, accepts six different types of coins.

One fine day, 21isenough just thought it would be nice to buy bitcoins for the little things that usually remain in their pockets, and that the Lightning Network is well suited for this.

“I thought it would be an interesting way to introduce people to bitcoins,” says 21isenough.

ATMs for the Lightning Network are very rare, or there are almost none. The first such device was introduced by Bitcoin developer Felix Weiss in March 2019 in Hong Kong.

To demonstrate the operation of the device, 21isenough posted a video on Twitter.

You insert the desired number of coins into a special receiver, and then press the button to start the process of exchanging coins for Satoshi. Then you open the Lightning wallet on your mobile phone, generate a QR code and place it in front of the camera of the device for scanning. Next, ATM for Lightning converts your coins into Satoshi and sends them to your wallet. The whole process takes less than a minute, says 21isenough.

21isenough is thinking about whether to create mass production of such devices, or start selling kit kits for those who are interested in such homemade products. The author also posted a list of parts and code for the device on his GitHub page, warning that the device is still under development. 21isenough is still engaged in some improvement of the software of his brainchild, and then wants to publish a complete user guide.

For those who want to build and run their own ATM for Lightning, parts will cost $ 50-70 and include a Raspberry Pi Zero WH computer, a 16 GB SD card, a PaPiRus Zero ePaper / eInk screen and a Raspberry Pi Zero camera. In addition, you have to purchase a coin receiver, a button, cables and a power source.

One of the problems with bitcoin is that it is poorly adapted for micropayments and outlets (for example, to buy a cup of coffee), and transactions in the blockchain itself can take up to 10 minutes. Also, the cost of sending small fractions of bitcoin can be excessively high compared to the amount sent.

However, the Lightning Network was created to solve these problems. Transactions in this network occur almost instantly and at a very low price.