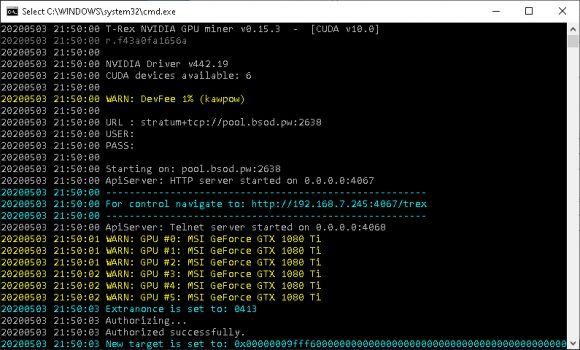 The latest version of the T-Rex miner Nvidia 0.15.3 introduced support for the new KAWPOW algorithm, as expected during the fork of RavenCoin (RVN), which will appear in a few days – May 6, 2020 at 18:00: 00 UTC. In addition to the new Kawpow support for the upcoming RVN branch, the latest T-Rex miner also adds support for the ProgPow and MTP-tcr algorithms. In addition to T-Rex, which adds support for KAWPOW in the latest version, there are already several other alternatives – the official open-source kawpowminer, the latest TT-Miner, the latest NBMiner and the latest GMiner. The only one who still lacks KAWPOW support is Z-Enemy, however Enemy has already announced that there should be an update to the RVN fork, and it will also support the new Ravencoin algorithm.

T-Rex is a closed source miner for the Nvidia GPU, available for both Linux and Windows operating systems. The miner comes in several versions supporting CUDA 9.1, CUDA 9.2 and CUDA 10.0.

Other versions of T-Rex: