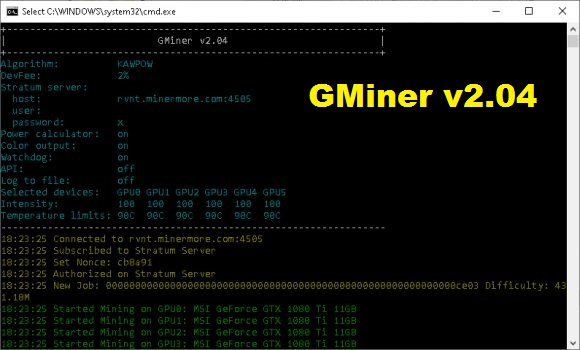 It did not take much time, and now the newest GPU miner GMiner 2.04 has added support for the new KAWPOW mining algorithm, which RavenCoin (RVN) could / could / should / should have woken up around April. The KAWPOW algorithm is derived from ProgPOW with parameters specific to RavenCoin, so another miner with ProgPoW support will not work unless specific RVN support is added, as is the case with GMiner, which already has ProgPoW support, but needs to be updated for KAWPOW support. Please note that KAWPOW support is currently only available for Nvidia GPUs, and this also applies to ProgPoW. You can already test KAWPOW support on the RavenCoin test network to prepare your miner, but there the token of the RVNt testnet miner does not matter.

In addition to adding a new algorithm, the latest version of GMiner solves the problem that we noted in connection with high CPU utilization in Qitmeer support (PMEER). A new “–trim” parameter has been introduced to control an additional trim cycle counter for the Cuckoo24 (Qitmeer) algorithm, which should help reduce CPU load, so you can try and see if it helps if you have any settings for GPU mining. with lower processors that have a high processor load.

GMiner miner software was originally only an Nvidia GPU miner, although some algorithms are already supported on AMD GPUs. Please note that GMiner is a closed source miner for Nvidia and AMD GPUs with binary files available for both Windows and Linux, with the firmware paying developers 2%.

To achieve the maximum performance of the GMiner miner, we recommend that you pay attention to the following utilities and software: