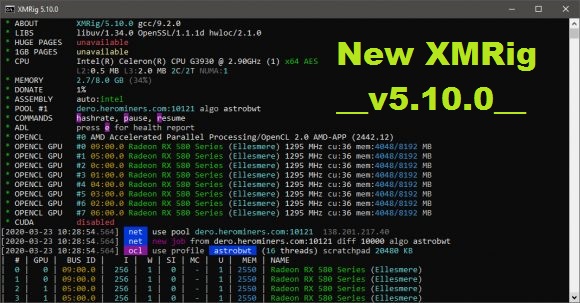 The latest release of XMRig 5.10.0 comes with support for the AstroBWT algorithm on AMD GPUs, in addition to the already available support for processor mining, as well as some optimizations for the algorithm used by DERO, which is used in the DERO project, since the plug switched the algorithm earlier this month. Another important change in the miner is that the cn / gpu algorithm is now disabled by default and will be removed in the next major release (v6.x.x), as well as in the main update of the Transport Layer Security (TLS) subsystem. Regarding the performance of AMD GPUs according to the AstroBWT algorithm compared to processor mining, the AMD Radeon RX 580 8 GB seems to create hashing speed slower than that of mid-range processors. A high-performance processor such as the AMD Ryzen 3900X can be 4 times faster than the RX 580 GPU, so mining AMD GPUs may not be as attractive to AstroBWT.

XMRig – it is a high-performance miner for the Monero cryptocurrency (XMR) on the GPU and CPU with support for both Linux and Windows. It was originally based on cpuminer-multi, with a large number of various modifications and improvements, as well as the removal of a large amount of legacy code. Starting with version 1.0.0. – completely rewritten from scratch in C ++

To get coins, we need to create or edit a finished batch file for the coin you need. These are the basic settings that are enough for mining.

It is important to add the “pause” key at the very bottom of the batch file, so that in the event of a program error or incorrect .bat file syntax, the program would not immediately close, but would display an error code and description on the screen

On this, the basic configuration of the miner can be completed and the program launched. But for completeness, we will consider all the keys of the program in the “Advanced Settings” section.

An example of a batch file for processors:

An example of a batch file for Nvidia:

To achieve maximum performance of the XMRig miner, we recommend that you pay attention to the following utilities and software: