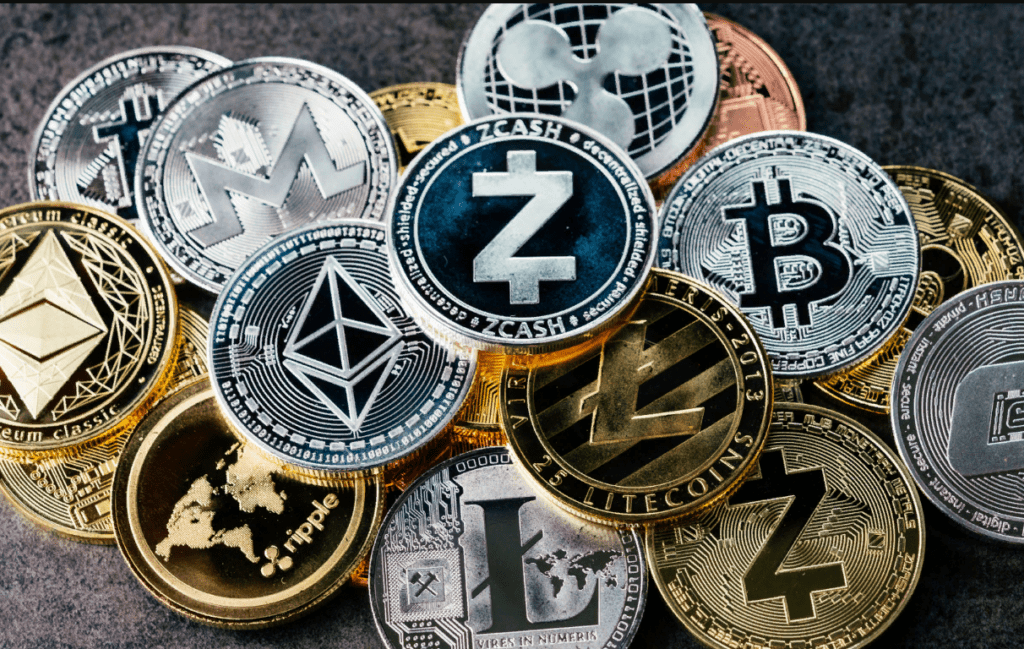 In 2021, the bitcoin industry experienced a further upswing. Large corporations have openly invested in bitcoin. Even some countries, such as El Salvador and Cuba, have adopted the first cryptocurrency as a form of payment. Throughout the year, the market was mainly driven by bitcoin. The cryptocurrency grew by more than 60% from January to December (from $28.94 in January to $47.68 in December). In November, the purchase price rose to $68,000. The value of other coins has also increased. This growth, however, does not correspond to the expected “altcoin season”, which disappointed investors. The same thing happened in early 2022. Only a small part of the coins contributed to the regional expansion of BTC. The rest had a slight negative. You need to find out what influences the exchange prices of digital currencies and how they relate to the behavior of the flagship in order to understand why altcoins are falling and bitcoin is growing.

The cost of bitcoin and other cryptocurrencies correlates.

The digital market is actively growing and maturing. A study conducted by analysts (Binance) in 2018 established a significant link between top cryptocurrencies and bitcoin. Other cryptocurrencies insisted on this as core assets increased. The collapse of the altcoin market was caused by a sharp decline in the price of BTC. Diversification of investments in this scenario was undesirable, since all the first 20 assets showed synchronous behavior.

However, significant changes have been made to the digital industry recently. Well, bitcoin is growing, while altcoins are declining in price, and vice versa. The first cryptocurrency coin no longer has a significant impact on other assets. At the same time, BTC’s dominance in the market is weakening. There was a decrease from 67.8% in January 2022 to 43% in June 2022. Experts explain such shifts by the maturity of the market. There are a lot of interesting initiatives currently underway that demonstrate new technologies. They can increase their market share and reduce their need for BTC by offering popular products.

Analysts from Cryptonisation have studied the relationship between the price of altcoins and bitcoin by the end of 2021. Experts have calculated the mutual correlation between pairs of top cryptocurrencies by capitalization.

Then, analysts tracked changes in the value of assets as BTC grew. Using the data obtained, three categories of alternative coins were identified:

1) With a strong positive BTC connection. The list includes Ethereum, Litecoin, Cosmos, Dash and Theta Coin. They can be applied to arbitrage and pair trading. 2) Cryptocurrencies that slightly delay the replication of BTC movement. Such coins, according to experts, are undervalued. Tezos, Zcash, Eos, Neo and Stellar are just some of them. 3) Cryptocurrencies with a slight dependence on the price of bitcoin. Ripple, Dogecoin, Solana, Cardano and Matic are good investments.

The reasons for the fall in prices.

After the price of the first cryptocurrency reached a record high of $ 49,000 in February 2020, the quotes of the major currencies fell sharply. Bitcoin has updated records 11 times in 2021. Coins in the top 10 rose after the announcement, while the market as a whole was calm.

For a number of factors, the decline in altcoin prices and the growth of BTC are related.

1) The market is dominated by the first cryptocurrency, while the prices of other assets are falling at the same time. 2) Altcoin investors transfer money to bitcoin as it grows in value.

Each new BTC price record in 2021 attracted more and more money from businesses and individual investors. Tesla, LG Electronics, MicroStrategy and other titans of the industry have acquired the most popular cryptocurrency. As of June 2022, Elon Musk has $2.7 billion worth of bitcoins on his balance, and he vows to start accepting them for automatic payments. About 30% of the richest families in the world, according to the analytical firm Campden Wealth, invested in bitcoin. 43 percent more people want to do this in 2022.

In 2021, the superiority of the coin exceeded 40%. By January 2022, the share of assets had decreased to 39.65%. Some time later, bitcoin regained its position. The currency has gained more dominance since February. As of June, the flagship accounts for 43% of the market.

The reasons for the increase in cost.

The projected growth of the cryptocurrency industry in 2021, according to analysts, varies. The subsequent decline in prices in November set a predictable trend when the financial firm Invesco called the subsequent surge of bitcoin a “bubble”. Experts predict that the price of bitcoin could fall to about $30,000 in 2022.

But most experts reject the Invesco analysis. According to Artem Deev, head of the analytical department of AMarkets, in 2021 there will be an organic expansion of a significant digital asset. Institutions, private buyers, enterprises in certain industries and individuals have all purchased cryptocurrencies. BTC was a method used by experienced investors to manage inflationary risks.

By the end of 2021, the situation had changed. Money began to leave the cryptocurrency market after inflation in the US and Europe reached alarming levels. Investors switched to less risky assets to reduce risks (gold, commodities). According to Artem Deev, the growth of the dollar index and the price of government bonds leads to the fact that the cryptocurrency is often adjusted. According to Nikita Soshnikov, director of the Alfacash exchange business, the true price of bitcoin ranges from $47,000 to $55,000.

The exchange rate of the digital currency began to rise in January 2022. In March, the BTC price was $44.41. The growth of interest rates in the United States and the lost profit syndrome experts call the key reasons for the expansion of the asset. Many investors are convinced that the currency has fallen to its lowest point and it needs to be bought. But the price of bitcoin continued to decline. In June, the currency fell below $20,000.

The interest rate was raised by the US Federal Reserve.

Starting in March 2022, the BTC price dropped to $37.35. But after a week, the cost increased, and then returned to $40,000. The market value of the main cryptocurrency increased by 16% on a monthly basis to $ 840.92 billion. Analysts said that the market is currently recovering.

Roman Nekrasov, the co-founder of the ENCRY Foundation, explained this growth by rising interest rates in the United States. Investors expected that the Fed would take active steps to reduce the risk of inflation. The obvious solution is to accelerate the increase in the key rate. Meanwhile, investors are transferring funds to safe haven assets such as gold, government bonds and bitcoin.

According to experts, a record amount of wealth entered the cryptocurrency market in 2021. According to the CoinShares investment platform, institutional investments in digital assets amounted to $ 9.6 billion. This is 36% more than $6.8 billion in 2020. Most of the purchases made by professional investors are still made in BTC. Net investment in bitcoin for the year amounted to $6.3 (16% more than in 2020).

Bitcoin has grown by more than 180% between January and July of this year. According to the analytical firm CoinMetrics, around the same time, the connection between bitcoin and other cryptocurrencies weakened. In July 2019, an analysis of Binance was published, in which experts confirmed the rejection of the complete dependence of cryptocurrencies on the market leader. The correlation of ETH and BTC decreased from 0.889 to 0.81, and XRP – from 0.85 to 0.69. The top 10 cryptocurrencies faced a similar problem.

Correlation coefficients between alternative currencies and BTC decreased in subsequent years. However, altcoins are still heavily dependent on the main cryptocurrency. According to research, assets with a correlation value of 0.5 or more are considered closely related. A low index indicates a lack of association. In terms of growth cycles, altcoins continue to lag behind bitcoin. However, historical evidence suggests that they will eventually catch up.

The next bitcoin boom in 2021 attracted many newcomers to the cryptocurrency market. A growing asset is often overestimated by investors. When the coin price increases by 20-30%, you open a long position, trying to maximize your profit.

This type of activity is typical for the digital market and even has an impact on the pricing of cryptocurrencies. Investors transfer funds from another currency to bitcoin as it grows. The most affected cryptocurrencies are those that are traded in a BTC pair. New currencies and tokens launched on decentralized exchanges (DEX) can basically withstand any bitcoin price volatility.

Starting in 2022, bitcoin will continue to be the most widely used cryptocurrency. The market value of the asset as of June is $ 386.29 billion. The total volume of the second largest Ethereum coin is projected to be $133.85 billion. The difference between the two largest cryptocurrencies is rapidly shrinking. When all BTC coins ($358 billion) were mined at the end of 2020, the capitalization of ETH ($66 billion) was just over 20% of this amount. But bitcoin still dominates the business.

The first cryptocurrency was created 13 years ago, and now more than 17,000 coins and tokens are available on the digital market. However, bitcoin remains the standard for evaluating other assets. As with other financial products, states apply the BTC regulatory guidelines. Several billion dollars are deposited in digital currency by large enterprises and funds. The recognition of institutional investors also helps to spread the word about bitcoin.

Most likely, when fresh capital enters the cryptocurrency market, it will switch to bitcoin. The first cryptocurrency continues to lead and directs the movement of other currencies. Despite the dominant market share, BTC is losing ground. In parallel, there is a decrease in the dependence of altcoins on the leading cryptocurrency. The flagship and other assets still have a significant correlation, but the critical threshold has not yet been reached. Altcoins are currently growing more slowly than bitcoin starting in 2022, but eventually they will start to have an impact.

Best mobile wallets for Bitcoin and Altcoins for iOS and Android

How to withdraw cryptocurrency: ways to withdraw BTC, ETH, XMR, RVN and other altcoins in fiat